My classmates who live on campus have each other to practice on for OSCEs. I have had to be creative and use my younger brothers as my models as a result of my home-dwelling status. Getting my little four year old brother to sit still was a mission but once I realised that my stethoscope had an oddly calming effect on him, I had him in the palm of my hands. My little brothers are skinny so learning to percuss on them was a dream ! Those imaginary intercostal spaces that I can never seem to find on other people were clearly visible ! Skinny brothers for the win 🙂

My OSCE was earlier this morning and it went a lot better than I anticipated 🙂 I have spent the greater part of this week in a frenzy of OSCE preparation. I was on the verge of a nervous breakdown last night but I was strangely tranquil this morning. It must be the post administrative effect of coffee .

We had four stations to cover in the OSCE and five minutes allocated for each station. In retrospect ,I should not have stressed myself out so much because it was only twenty minutes in total. Twenty minutes that I spent weeks preparing for.

Station 1 : I started with the vital signs examination. My examiner was a really mean looking lady! She gave me the eye when I walked in but that didn’t put me off because I, in the five seconds that I had made her acquaintance, concluded that she was probably one of those people who suffer from BRF ( Bitchy Resting Face). I say suffer because one cannot possibly elicit any joy from looking so angry all the time.  She was a little bit like a dementor though – sucking out all the happiness from the air. The room was strangely chilly but that may have been because of the air conditioner. ( or was it ?) 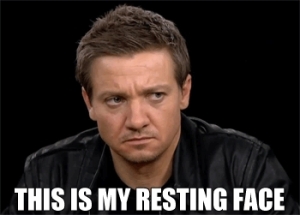 BRF explains so many people that I’ve encountered in life ! I used to think that people just didn’t like me or weren’t particularly nice and it just turns out that their faces kind of do their own thing.It wouldn’t have hurt that examiner to smile a little.I digress. I was busy talking about my OSCE.

Prior to my OSCE, I had decided that vitals would be the station that I would smash ( by smash I mean do really well in ) because you only have three things to do : respiratory rate, pulse and temperature. We do blood pressure in second year. My patient was muscular and fit so his pulse (which took me forever to find !) was only 50 beats per minute. His respiratory rate was 12 breaths per minute (which is normal) and his temperature was in the normal range too .I ran out from that station as soon as the bell rang. If I had stayed any longer, I would have needed an entire bar of chocolate to feel like myself again.

Station 2: Systems examination. This was the part of the OSCE that I was most terrified about. We had to prepare all three of our systems ( Gastro , CVS and Resp) because our examiners could ask us to demonstrate anything from them. My examiner was the module secundus( the second in charge), so I felt absolutely no pressure to do well at all – yes, I am being incredibly sarcastic.

When he asked me to demonstrate chest palpation and percussion I had to refrain from whooping for joy and jumping up and down because those were the two techniques that I was most confident in demonstrating !

I had been so worried that he would ask me to measure the JVP ( jugular venous pulse ) because that is always so difficult for me . It takes me a long time to do it properly and I would have panicked if I only had five minutes to demonstrate it. My patient was lovely ! He was incredibly lean so percussing on him was no problem at all.

Station 3 : Computer station. We had to identify the pathologies on five slides. They had given us an extensive list of pathologies and I am so glad that I actually made use of the internet to find out what ascites looks like because I would not have been able to guess.

Station 4: Pathological specimen identification.They took specimens from the medical museum that we had to identify and describe correctly. I had a gangrenous foot. I was so so so happy ! Not happy because I like gangrene but because I had lectured my teddy bear Alfie on all the pathological specimens yesterday and when my friend and I visited the museum last week , this was the specimen that I found amongst the easiest to remember.

Yes, I teach my teddy bears (stop judging my study methods) 🙂 . I have a theory that my teddy bears are more intelligent than the average human being, myself included , because they retain all the knowledge I give them.

I adore comments ! Feel free to drop one below :) Cancel reply

From cuffed pants and artisanal coffee to medicine and beautiful things. This is the world through my oversized glasses.

Life of an SI

me and my life

Wanderlusting through life and medicine

Thoughts and Prescriptions | Its not all medicine

My life and medicine

Medic | on the Borderline

Babbling through my borderline existence: medical school and mishaps

An insight into my journey through the school of life

A Mother in Medicine

An insight into the life of a fourth year medical student who believes in God, dances and wants be a humanitarian in a developing country.

Personal site where II get to share my thoughts, hobbies and addictions just so you get to know me better

Petals in a Storm

survival of the fittest...